"We are more than Champions through Him who loved us." – Romans 8:37
pastor@champions.church 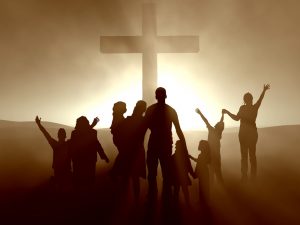 16Then Paul stood up, and motioning with his hand said, “Men of Israel, and you who fear God, listen:  17The God of this people Israel chose our fathers, and exalted the people when they dwelt as strangers in the land of Egypt, and with an uplifted arm He brought them out of it.  18Now for a time of about forty years He put up with their ways in the wilderness.  19And when He had destroyed seven nations in the land of Canaan, He distributed their land to them by allotment.  20“After that He gave them judges for about four hundred and fifty years, until Samuel the prophet.  21And afterward they asked for a king; so God gave them Saul the son of Kish, a man of the tribe of Benjamin, for forty years.  22And when He had removed him, He raised up for them David as king, to whom also He gave testimony and said, ‘I have found David the son of Jesse, a man after My own heart, who will do all My will.’  23From this man’s seed, according to the promise, God raised up for Israel a Savior—Jesus—  Acts 13:16-23

Question: What characteristics would qualify us to be considered a man or woman after God’s own heart?

Psalm 25 teaches us that even when David’s enemies were all over him, he desperately sought God for His will. This Psalm is one of Davids deepest cries to God.

1To You, O Lord, I lift up my soul. 2O my God, I trust in You; Let me not be ashamed; Let not my enemies triumph over me. 3Indeed, let no one who waits on You be ashamed; Let those be ashamed who deal treacherously without cause. 4Show me Your ways, O Lord; Teach me Your paths. 5Lead me in Your truth and teach me, For You are the God of my salvation; On You I wait all the day. 6Remember, O Lord, Your tender mercies and Your lovingkindnesses, For they are from of old. 7Do not remember the sins of my youth, nor my transgressions; According to Your mercy remember me, For Your goodness’ sake, O Lord. 8Good and upright is the Lord; Therefore He teaches sinners in the way. 9The humble He guides in justice, And the humble He teaches His way.  Psalm 25:1-9

David was fully aware that God was in control of his life, and he had faith that God would deliver him from impending danger. God increased David’s faith in Him by giving him trials in his daily life to get him prepared for the future battles such as with Goliath.

34But David said to Saul, “Your servant used to keep his father’s sheep, and when a lion or a bear came and took a lamb out of the flock,  35I went out after it and struck it, and delivered the lamb from its mouth; and when it arose against me, I caught it by its beard, and struck and killed it.  36Your servant has killed both lion and bear; and this uncircumcised Philistine will be like one of them, seeing he has defied the armies of the living God.”  37Moreover David said, “The Lord, who delivered me from the paw of the lion and from the paw of the bear, He will deliver me from the hand of this Philistine.” And Saul said to David, “Go, and the Lord be with you!”  1 Samuel 17:34-37

David is named as the author of 75 Psalms, but may have written more.  In them he repeatedley expressed how much he loved God’s word and mediated on them.

7The law of the Lord is perfect, converting the soul; The testimony of the Lord is sure, making wise the simple; 8The statutes of the Lord are right, rejoicing the heart; The commandment of the Lord is pure, enlightening the eyes; 9The fear of the Lord is clean, enduring forever; The judgments of the Lord are true and righteous altogether. 10More to be desired are they than gold, Yea, than much fine gold; Sweeter also than honey and the honeycomb. 11Moreover by them Your servant is warned, And in keeping them there is great reward.   Psalm 19:7-11

No matter what David experienced such as peace, prosperity, fear or despair, he was thankful.

1Make a joyful shout to the Lord, all you lands!  2Serve the Lord with gladness; come before His presence with singing.  3Know that the Lord, He is God; it is He who has made us, and not we ourselves; we are His people and the sheep of His pasture.  4Enter into His gates with thanksgiving, and into His courts with praise.  Be thankful to Him, and bless His name.  5For the Lord is good; His mercy is everlasting, and His truth endures to all generations.  Psalm 100:1-5

The mighty fall hard, and David’s fall included adultery, lying, and murder. Asking for forgiveness was only half as the other half was repentance.  *Selah means to praise or pause and reflect.

5I acknowledged my sin to You, And my iniquity I have not hidden. I said, “I will confess my transgressions to the Lord,” And You forgave the iniquity of my sin. Selah  8I will instruct you and teach you in the way you should go; I will guide you with My eye. 9Do not be like the horse or like the mule, Which have no understanding, Which must be harnessed with bit and bridle, Else they will not come near you. Psalm 32:5,8-9

Uncategorized
2021 Champions Bible Church. All Rights Reserved.
"We are more than Champions through Him who loved us." – Romans 8:37